Botley is a male-programmed robot who first appeared in JumpStart Adventures 3rd Grade: Mystery Mountain, in which he is the main protagonist.

In that same game, he is shown to be created by Professor Sparks and is a resident of Mystery Mountain.

In JumpStart 3rd Grade and JumpStart Typing, Botley's body is mostly cerulean in color. Several parts of his body, such as his knee joints and shoulder blades, are dark blue. He has three different colored buttons on his chest, one red, one green, and one dark blue. His eyes are red-orange, and he has purple eyebrows. He has a yellow antenna on top of his head that flashes when he activates his "powerful sensory device", and he can extend his right hand several yards by uncoiling a purple cord at the edge of his right arm.

In JumpStart Adventure Challenge, Botley's body is mostly silver and he has red eyes. He has no buttons on his chest, and the parts of his body which were previously dark blue have been changed to dim purple.

In the JumpStart 3D Virtual World series, Botley's appearance is very similar to his JumpStart 3rd Grade design. His antenna is red instead of yellow.

In JumpStart Junior, Botley is given a "preschooler form", which is slightly different from his previous design. Botley's preschool form is shorter overall, the three buttons on his front are all blue with two lines beneath them, and the red ball on his antenna is larger.

Botley's appearance in the JumpStart World "Growing Smart" Laugh with Me Botley toy is similar to his World and online game design, but is smaller, squatter and chunkier, with much shorter legs. Its coloration is also slightly different - his body is grey-blue instead of the brighter blue in the game, and the purple parts of his body are magenta. The front of his body contains an LCD screen and a lot of buttons, rather than the simple panel with only 3 buttons in the games.

Artwork of Botley from the JumpStart Spy Masters series 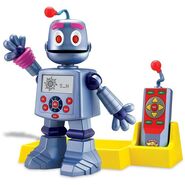 Laugh with Me Botley toy
Add a photo to this gallery

Botley is a helpful and friendly robot. In JumpStart 3rd Grade, he is shown to be somewhat more sensible and obedient to the wishes of his creator, Professor Spark, than the other robots. He also possesses a great sense of urgency with regards to saving the world. He tends to be honest and forthright, openly stating his mind to the player, though less so when Polly is around. He is also somewhat clumsy. Like the other robots, he possesses a great appetite, though he's not shown eating anything throughout the game due to his focus on saving the world.

Botley's profile in JumpStart World says, "Botley is a robot who loves people. He knows everything about Camp JumpStart. His best friend is Frankie. Botley says, 'Welcome Scout! Come find me any time. I love to help!' "

In JumpStart Junior, Botley mentions that he is easily distracted by shiny things.

A quote from Botley on the JumpStart Blog says, "Hey Jumpeez! My name is Botley and I’m excited to meet all of you today! I love meeting new people and learning new things about them! I’m always storing information about people I meet, places I go and things I do.. never know when it might come in handy!"[2]

The JumpStart Blog says, "Nobody has been around camp as long as Botley! You can get tons of information from him, but be warned: Botley’s facts are not always perfect since hanging around the fountain all the time has rusted a few of his circuits."[3]

An article for the JumpStart News Team on the JumpStart Blog says, "Botley has a very important role on the team. His job is to make sure that all the exciting and fun facts we find and report are accurate. It may sound like a simple task but it actually requires a lot of concentration and patience. He is the ultimate gatekeeper for maintaining accuracy and reliability in each issue of JumpStart Times!"[4]

A fan-submitted worksheet on JumpStart.com has also stated, "Botley is a nice robot, if a little clumsy. A long time ago, maybe even before you were born, Botley saved the world! But now, he lives a pretty quiet life."[5]

Botley is the mascot and main character of the game aside from the player. He assists the player in their task of saving the world from Polly's time-traveling mischief, informing them about the many different features of Mystery Mountain and helping them obtain the Mission Clues and Invention Points they need.

Botley was built by Professor Spark as a "prototype companion device" for his daughter Polly since the Professor had difficulty finding sitters for her since she kept scaring them away. Curiously, Botley seems to be able to override his own programming if he sees fit, since he stated that it was against his programming to reveal the existence of the Time Machine and that he decided to reveal it to the user anyway, given the global emergency Polly had created.

The buttons on Botley's chest are shown to activate certain abilities. The blue button makes a rocket come out of his back, enabling him to fly, though not very well since he wasn't programmed to fly. The red button opens up his stomach plate, but it's never explained what the green button does. Also, Botley possesses lingual capabilities, as he can be heard speaking in Russian, so it can be assumed that he also possesses fluency in other languages besides English.

Botley must help coach the Sparks Dream Team after Polly locks up the coach.

Botley is a member of the Spy Masters. He always stays at headquarters rather than going on missions. Whenever the player is playing an activity, he appears on a screen on the toolbar in order to give the player advice, serving as the game's Help button. In these games, the buttons on his chest allow him to activate his personal anti-virus program

Botley appears in the second game in this sub-series, JumpStart Advanced 3rd Grade: Mystery Club Vol. 2. In this game, the player and Botley investigate various crime scenes to solve mysteries.

Botley appears as a resident of JumpStart Town. The player may sometimes talk to him and receive tasks from him.

Botley is the main character of the game, and he serves as the player's guide. The player must help restore Botley's memories. In contrast to his other appearances, Botley here is shorter overall, and is more child-like in his personality and mannerisms.

Botley appears in the activity Botley Scale. In this activity, Botley will hold up objects in each of his hands. The player must either click on the hand with the object or set of objects that is lighter than the other, or click on the equal sign on Botley's torso if both hands hold the same weight.

Botley appears in the JumpStart Summer Vacation Activity Book for 3rd Grade. In the "Where's Botley?" activity pages, the reader is presented with a scene, and asked to find where Botley, Polly, and Egbert are. He and Polly are also the main characters of a short story included in the book called "Mystery Mountain Munchies".

The toy JumpStart World "Growing Smart" Laugh with Me Botley is modeled after him.

Retrieved from "https://jstart.fandom.com/wiki/Botley?oldid=36664"
Community content is available under CC-BY-SA unless otherwise noted.