CJ is a male frog character who first appeared in JumpStart 2nd Grade. He is generally depicted as an adventurer and explorer.

In the past, he and Edison were often the mascot characters for JumpStart's 2nd Grade media. Prior to the JumpStart World series, the two of them were depicted as close partners and almost always appeared together.

Originally in JumpStart 2nd Grade, CJ only wore a tan hat. His body was also more like that of an actual frog. In all later appearances, CJ's body is more human-like, and he has a more noticeable distinction between his head and torso.

In the JumpStart Advanced series, CJ wears a tan vest over a white shirt and dark cream-colored pants.

In JumpStart workbooks, CJ's character design is identical to that in the Advanced series, except for the colortion of his hat, vest, and pants, which are all brown.

In the current JumpStart series, CJ has three forms, one for preschool/kindergarten, one for first grade, and one for second grade. In his preschool/kindergarten form, he is small and wears a white T-shirt, light brown shorts, and a brown backpack. He also wears a large tan hat which usually covers his eyes. In his first grade form, he is taller and skinnier, and wears a cream-colored shirt with elbow-length sleeves, light brown shorts, and a large tan hat which usually covers his eyes, though usually they can partially be seen. He also has a whip attached to his belt. In his second grade form, his hat no longer covers his eyes, and he wears a light cream shirt with a light brown collar and rolled up sleeves, reddish-brown pants, a belt with a whip attached to one side and a fanny-pack like accessory attached to the other side, and brown boots.

Artwork of CJ from JumpStart Math for Second Graders

Artwork of CJ and Edison for JumpStart Reading for Second Graders

Artwork of CJ and Edison for JumpStart Spelling 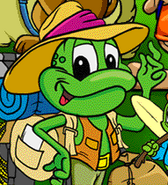 CJ in JumpStart Around the World 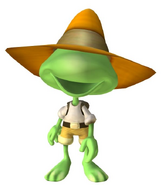 CJ as a kindergartner in the JumpStart World series

CJ as a first grader in the JumpStart World series

CJ is adventurous, enthusiastic and optimistic, and has a passion for exploring. The JumpStart Blog says, "Brave, daring and energetic, CJ is always on the lookout for a good adventure. If there’s a lost treasure, a sunken ship or secret caverns, CJ will lead the expedition…even if it is all in his imagination."[1] He is also courteous, friendly, responsible, and genuine.

CJ's profile in JumpStart World says, "CJ is an explorer. He can run, jump, and swim. But best of all, he likes to catch fish in the sea. CJ reads adventure books. CJ says, 'I get big ideas for adventures from my favorite books. '" According to other characters' JumpStart World profiles, CJ is best friends with Hopsalot and Kisha.

On a now-defunct site for the JumpStart All-Stars, CJ's profile said, "CJ is fearless and loves nothing more than a good challenge. Accompanied by his firefly sidekick, Edison, CJ combs the natural world, classifying creatures and jotting down patterns in his field book. Mysteries are his passion, and he travels the world to solve them, meeting diverse people along the way. His desire to do good is matched only by his desire for adventure. Secretly, CJ would like to be an international spy when he grows up."[2]

CJ has a habit of making somewhat unusual exclamations when he speaks, such as "Zounds!" and "Egads!".

Edison is CJ's best friend, partner, and constnat companion. Prior to Edison being dropped from the series, Edison appeared in virtually every product that CJ did.

CJ is sometimes depicted as liking to eat insects and arthropods like a real frog, while other games show him having a more human diet.

Using an elevator, CJ and Edison go to their clubhouse above the classroom after school and have adventures.

CJ makes a cameo appearance on the Second Floor. If the user clicks on the frog in a fishbowl on the table, it will stand up and put on a hat, turning into CJ.

CJ makes a cameo appearance in the woods.

CJ and Edison go on a quest to save a medieval kingdom from the villainous Ratso. CJ has the title of Royal Flycatcher, and he hopes to be promoted to a knight.

CJ and Edison go on a quest to find the lost city of Ursulab. CJ and Edison must visit different locations to collect jewels that uncover the secrets of Ursulab. However, they must also confront CJ's nemesis Dr. Listick, who intends to find the city for his own selfish gain.

CJ ventures through a prehistoric setting to save Edison from some cavemen.

CJ and Edison appear in the Fire Station activity.

CJ and Edison are the player's travel buddies in the second grade version.

CJ appears in the activity "CJ & Edison's Art Expeditions". Edison will ask for three objects. The player must maneuver CJ around the storage tent and collect the items that Edison wants.

CJ appears as the main character and host of the game. He, with the assistance of Edison, hosts the Expo Hall, whether it comes to printable things or video voyages. He is also the guide for helping every new player with signing up, or every old player with signing in, and for changing levels.

CJ has a minor appearance in this game. He appears alongside Hopsalot in the opening cutscene.

CJ and Edison travel around the world to different locations in time to find CJ's nieces and nephews.

CJ, his nieces and nephews, and Edison travel to different habitats to find and take photos of animals.

CJ is one of the JumpStart All-Stars. The player can select him as their partner and call him for help.

CJ is one of the JumpStart All-Stars. The player can select him as their partner and call him for help.

The player can visit CJ at his house and play an activity, CJ's Swamp, there.

CJ is one of seven characters who can be selected to be the player's racer, and he has his own power-up, gadget, trick, and track. His power-up is Swamp Gas, his gadget is the Frog Leg Hoppers, and his trick is the Lily Pad Hop. His track is lined by magnifying glasses, and the surrounding areas various plants and ponds.

CJ is also one of the JumpStart All-Stars. The player can select him as their partner and call him for help.

CJ and Edison are agents working for JumpStart Headquarters. They have to stop the schemes of the nefarious Dr. O. Together they travel around the world and collect gadget pieces for Hopsalot's inventions.

CJ is also one of the JumpStart All-Stars. The player can select him as their partner and call him for help.

CJ and Edison go on round-the-world trips and collect souvenirs.

The player takes on detective cases with CJ. All of these cases involve finding out where Edison is hiding by investigating clues.

This is the last time CJ is seen with Edison. They briefly appear in the intro song where they head to the end of a rainbow to search for treasure.

CJ is one of the main characters and local residents.

CJ is one of the characters that the player can choose to be their racer. He resembles his preschool / kindergarten form.

CJ appears in one of the missions given to the player which involves meeting him and talking to him at Adventure Canyon. Afterwards, he doesn't appear there. CJ mainly appears in the activity Dune Buggy Racer, in which he accompanies the player on a buggy ride.

CJ also previously appeared in the StoryLand area in the game, prior to its movement to JumpStart Junior.

CJ is a main cast character who helps guide the player through the game.

CJ is a main cast character who helps guide the player through the game.

CJ and Edison make a few cameos in JumpStart Preschool: Who Left the Juice in the Caboose?.

In JumpStart Kindergarten: Why Did the Bus Stop?, CJ and Edison are firefighters.

CJ appears in the JumpStart Summer Vacation Activity Book for 2nd Grade. He is featured in several short stories inspired by JumpStart 2nd Grade, and also appears in the "Where's CJ?" activity pages where the reader is asked to locate CJ in a picture.

CJ appears in all of the Scholastic 2nd Grade workbooks and 2nd Grade Readers, as well as some other Readers.

CJ also appears in several Reading Readiness Readers released in 2005. He is a main character in the books CJ and The Chest of Gold and Frankie and CJ Take A Hike.

In 2000, Briarpatch released JumpStart Alphabet Card Game, which features CJ on some of the cards.

Around 2003, a set of JumpStart Dairy Queen toys included a toy based off of CJ called "CJ's Scoop 'n' Snoop".

See the gallery subpage for CJ images, or the category page for all media featuring CJ

Retrieved from "https://jstart.fandom.com/wiki/CJ?oldid=36217"
Community content is available under CC-BY-SA unless otherwise noted.