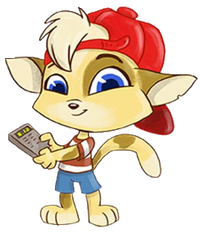 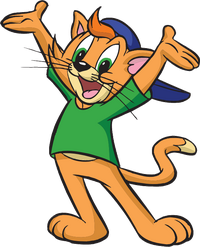 Casey is a male cat character who first appeared in JumpStart Preschool (1995). Since 1998, he has generally been depicted as fun-loving, active, and athletic.

In the past, he was often a mascot character for JumpStart's Preschool media, alongside Kisha, Eleanor and Pierre (see also: Preschool Gang).

In JumpStart Preschool (1995) and JumpStart Pre-K, Casey had cream-colored fur, one green eye, and one blue eye. He wore a white collar and a red tie.

In JumpStart Preschool (1998), his fur color has been changed to orange and both of his eyes are green. He wears a red T-shirt and a blue backwards baseball cap.

In JumpStart Preschool: Who Left the Juice in the Caboose?, JumpStart Kindergarten: Why Did the Bus Stop?, JumpStart Around the World and JumpStart ABC's, he is taller with skinnier arms and legs. His fur is yellow, and he has a tuft of dark orange hair hanging over his forehead. He still wears a red T-shirt and a blue backwards baseball cap.

In the JumpStart Advanced series, he has light orange fur with pale yellow fur around his muzzle, on his stomach, and on the tip of his tail, and he wears a green T-shirt instead of a red one, but the rest of his appearance is fairly similar to his previous design.

In the JumpStart Academy series, Casey has light yellowish fur with dark yellowish spots, and a tuft of pale yellow fur that hangs over his forehead. He also has blue eyes and a brown nose. He wears a bright red baseball cap backwards, a T-shirt with white and dull red stripes, and blue jeans.

Since at least the late 90's, Casey has often been depicted as energetic and enthusiastic, as well as somewhat prideful and reckless.

Originally, Casey had a much calmer disposition in JumpStart Preschool (1995) and JumpStart Pre-K. A biography for Casey on the old Knowledge Adventure site pertaining to his appearance in JumpStart Preschool (1995) stated that he grew up in San Jose, California, his favorite hobby is art projects, his favorite food is warm milk, and his favorite school subject is science (he is especially fond of experiments to prove Schrodinger's Cat hypothesis). He is also mentioned as being peaceful and preferring to avoid confrontation, and one of his hobbies is napping. [1]

In JumpStart Preschool (1998), Casey is depicted as being quite energetic, with this trait carrying on into later appearances. He has a bit of a mischievous streak, as seen when he disrupts and annoys Kisha, or he tries to climb to high places where he has trouble getting down from. He appears to be easily entertained, finding Pierre's jokes funny even though Eleanor thinks they're corny. He can also be rather impatient, such as having trouble waiting and staying still when Kisha was trying to paint a picture of him.

On a now-defunct site for the JumpStart All-Stars, Casey's profile said, "An unstoppable ball of energy, Casey knows only two speeds: fast and faster! He loves sports, any kind of sports, and attention, and any kind of attention! His innate curiosity and propensity to act before he thinks often get him into trouble. Casey doesn't want to grow up and dreams only of the next big game."[2]

A printable trading card in JumpStart Advanced 1st Grade: Art Club says regarding the character, "Casey Cat is a true athlete. He's great at sports, stunts, and anything competitive."

In the Advanced series, while Casey is stated to like all kinds of sports and games, he seems to be mainly associated with soccer. On the JumpStart All-Stars selection and quiz screen, Casey's banner has a soccer ball on it. In JumpStart Advanced 1st Grade, his personal activity involves playing soccer, and he has his own soccer field in his backyard.

In the Academy series, Casey is depicted as being fond of taking photos.

Casey is one of the main characters. He appears in a few of the activities.

Casey appears in the Airport, the Construction Site, and the Park activities.

Casey makes a cameo in the woods.

Casey appears in the activities "Toy Box", "Blocks", "Player Piano", and "Wagon and Balls". Unlike all of the other schoolhouse characters, Casey doesn't appear singularly in any activity. In the "Blocks" activity, his bouncing around makes Kisha's blocks get scattered.

Casey hosts the Pizza Palace mini-game. The player can help him find letters inside the pizza restaurant he owns. He also appears in most video clips and cutscenes, as he is a prime suspect for who left his drink in the caboose of the JumpStart train.

Casey is a camper at Camp Readalot. He appears in the River Raft activity.

Casey is one of the player's travel buddies in the preschool version.

Casey appears in the activity "Casey's Concentration". The player matches images to find clues about a painting, and then helps Casey select the correct painting.

When Casey visits a wild animal park with Frankie and Kisha, he gets lost while running after a wild cat cub. The player can help Frankie and Kisha find Casey again and unlock him as a playable character by collecting letters in levels to spell out his name.

Casey appears on some of the rainy day craft pages.

Casey is one of the JumpStart All-Stars. The player can select him as a partner and ask him for help.

The player can visit Casey at his house and play an activity, Casey's Soccer Field, there.

Casey is one of seven characters who can be selected to be the player's racer, and he has his own power-up, gadget, trick, and track. His power-up is the Game Ball, his gadget is the Soccer Ball Kicker, and his trick is the Robo-Soccer Goalie. His track is lined by white blocks, and the surrounding areas have sports equipment.

Casey is an agent at JumpStart Headquarters.

Casey appears as one of the possible avatars for the player to use in the game. He and Roxy are the only two avatar characters to be unlocked by default when a new player first signs up to the game.

Casey appears as the main character of a storybook about the letter C. The story tells about some of Casey's favorite things that start with letter C.

Casey is a main character in JumpStart Preschool: Who Left the Juice in the Caboose?. He is one of Eleanor's prime suspects for who spilled juice and didn't clean it up in the caboose of the JumpStart train. He is seen making pizza at the schoolhouse, and invites Eleanor to have some. After Eleanor decides it wasn't him, Casey joins her in trying to solve the mystery.

Casey also made an appearance in JumpStart Kindergarten: Why Did the Bus Stop?. At one point, he is seen stuck up in a tree, and is rescued by firefighters CJ and Edison.

Casey appears in all the Pre-K workbooks and Pre-K Readers, as well as some other Readers.

Around 2003, a set of JumpStart Dairy Queen toys included a toy based off of Casey called "Free Scootin' Casey".

Retrieved from "https://jstart.fandom.com/wiki/Casey?oldid=33588"
Community content is available under CC-BY-SA unless otherwise noted.