Cecil is a male mouse character who first appeared in JumpStart Preschool (1998).

Originally, Cecil looked like a gray mouse with grayish blue eyes wearing an orange vest, blue pants held up by a brown strap, and brown shoes.

Cecil is friendly, smart, and responsible. In JumpStart Preschool: Who Left the Juice in the Caboose?, he states that Responsibility is his middle name.

Cecil appears in the activities Toy Box, Player Piano and Mouse Hole. In Mouse Hole, the player can play hide-and-seek with Cecil in his home.

Cecil appears in several video clips taken from JumpStart Preschool: Who Left the Juice in the Caboose?.

Cecil briefly appears in one of the cutscenes in the Frankie's Paint-Along Songs activity.

JumpStart Preschool: Who Left the Juice in the Caboose?

Cecil appears in several song sequences throughout the video. In the ABC song, he appears on the moon, wearing a space helmet, where he bites into a piece of moon rock only to spit it out and find out the moon is not made of cheese like he hoped, much to his disgust. He then sneezes, which sends him spiraling off into space. He also makes a brief appearance in the Letter P song, where he pops out of a pumpkin.

Towards the end of the video, it is revealed that Cecil was the one who spilled his juice, but he had no intention of leaving it there, as he was going to clean it up because he was responsible. He then says that's why responsibility is his middle name, revealing his full name to be Cecil Responsibility Mouse.

JumpStart Kindergarten: Why Did the Bus Stop?

Cecil makes a brief appearance at the JumpStart Train Station. He also briefly appears in a scene where Casey in stuck up in a tree and Cecil looks up at him with concern.

Cecil in his home, from JumpStart Preschool (1998)

Cecil riding on The Magical Train

Cecil in the Toy Box activity 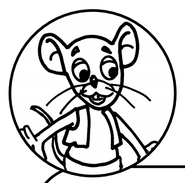 Art of Cecil from the JumpStart Preschool (1998) teacher's guide

Cecil in the Shipwreck Rhymes activity

Printable image set for Cecil and Hopsalot, from JumpStart ABC's