Tony Pope
Flap is a male bat character who appeared in JumpStart Adventures 4th Grade: Haunted Island. He is commonly seen as the mascot for that game.

Flap has purple fur, with eyebrows and a tuft of scruffy hair on top of his head that are slightly darker shade of purple. He has large eyes with small pupils, a small pointed nose,  pointy ears, and a wide mouth with two small protruding fangs. Although he has bat wings, he also has small human-like hands, which each have three fingers and a thumb. He also has wide, flat feet.

In JumpStart Adventures 4th Grade: Haunted Island, Flap is friendly and helpful, and he shows concern for the player and the Kids who were transformed into monsters. He knows the Haunted Island extremely well and is able to find his way around while avoiding Ms. Grunkle. Occasionally, he admits to be rather intimidated by Ms. Grunkle and her minion Repsac, at one point saying that being near Ms. Grunkle's House makes his skin crawl, but he usually maintains a calm disposition.

In the Mummy's Tomb activity, Flap mentions that he likes eating falafel, a vegetarian fritter dish.

A biography for Flap that was featured on the Knowledge Adventure website around the time of the game's release described more of his past and personality. Flap used to be a child until Ms. Grunkle cast a spell on him that turned him into a bat. He considers himself to be everyone's best friend, and all of the island dwellers consider him their pal (presumably barring Ms. Grunkle and Repsac). The bio also mentioned that one of Flap's favorite pastimes is hanging upside down from tree branches and singing "Old MacDonald", that his favorite school subject is life science as he feels it helps him better understand the inhabitants of the island, and that he is a vegetarian, since he says that he doesn't have the heart to eat another animal. One of his favorite sayings is "get going while the going's good." [1]

In the assessment test included with the 1.3 release of JumpStart Adventures 4th Grade: Haunted Island, Flap is able to appear and disappear in a puff of green smoke, something not seen in the game.

Flap serves as the player's guide. He can help the player by giving advice, and he explains how the game's activities are played. He has his own icon in the toolbar in the bottom of the screen. If the player clicks on it, he appears before the player to help them. He will always greet the player when they sign in or start a new game.

Flap appearing before the player

Flap popping up from the left corner of the screen 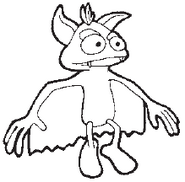 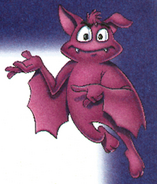 Promotional artwork of Flap
Add a photo to this gallery

Retrieved from "https://jstart.fandom.com/wiki/Flap?oldid=38327"
Community content is available under CC-BY-SA unless otherwise noted.