Hopsalot, also commonly known by the nickname Hops, is a male rabbit character who first appeared in JumpStart Kindergarten (1994). He is generally depicted as either as a schoolteacher or a genius inventor.

In the past, he was often the mascot character for JumpStart's kindergarten media.

Hopsalot originally had gray fur and a short, round body. He wore baggy blue overalls with gold buttons. While JumpStart characters have usually been depicted with three fingers and a thumb since then, in his debut, Hopsalot only had two fingers and a thumb.

In JumpStart Reading for Kindergartners, his body became taller and slimmer, and his face, inner ears, hands, and bottoms of his feet became peach-colored. In JumpStart Kindergarten (1997), he had the same body design, but he wore a dark green sweater and blue pants.

Around the year 2000, Hopsalot's age changed from that of a teacher to a student.

In the JumpStart Advanced series, Hopsalot has light brown fur, a pale cream-colored and tail, huge light blue eyes, and a reddish-brown nose. He wears a turquoise T-shirt.

In JumpStart 3D Virtual World and World of JumpStart, Hopsalot has pale creamy-brown fur. He has three forms, one for kindergarten, 1st grade, and 2nd grade. His kindergarten form has a small body, short straight ears, red glasses, a blue T-shirt, and darker blue shorts (a design which debuted in JumpStart Phonics: Read & Rhyme). His first grade form has a taller body with slightly longer arms and legs, long floppy ears, orange goggles, orange gloves, and a blue suit. His second grade form is even taller and skinnier than his previous form, and wears a blue suit with blue gloves, and white and blue boots.

In the JumpStart Academy series, Hopsalot's design is very similar to his previous design, although his glasses rims are pink instead of red.

Hopsalot on a scrapbook cover, from JumpStart Around the World 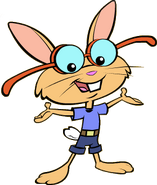 2D artwork of Hopsalot as a kindergartner (JumpStart World series)

Prior to the JumpStart Advanced era, Hopsalot was usually depicted as a kindergarten teacher with a warm, friendly, and enthusiastic personality. According to JumpStart Reading for Kindergartners, Bebop is an old friend of Hopsalot.

A biography for Hopsalot that appeared on the Knowledge Adventure website during the late 90s described him as "a teacher at heart" who loves telling stories to children. The biography also mentions that his favorite school subject is reading and that he loves anything having to do with books.[1]

In later games, Hopsalot appears to be younger and no longer retains his role as a teacher; rather, his intelligence is channeled into being an inventor who enjoys making all sorts of gadgets. This love of making inventions first appeared sometime in 2000, possibly making its first appearance in JumpStart Artist.

On a now-defunct site for the JumpStart All-Stars, Hopsalot's profile said, "Hopsalot is the genius of the group, always busy inventing gadgets, solving problems, and perfecting the quality of his vegetable garden. You can gauge the difficulty of the problem Hopsalot is tackling by the speed of his toe-tapping. Hopsalot wants to be a great inventor someday--little does he know, he already is!"[2]

The JumpStart Blog says, "For Hops, there is nothing more exciting than completing a new gizmo or gadget. He’s always working on some cool device to solve a problem and would love to show you his latest invention."[3]

A fan-submitted worksheet on JumpStart.com states, "Hops is a unique fellow who's very smart on every subject, but especially math and science. He likes teaching others what he knows, and he's always making all sorts of inventions and amazing gagdets. Some work and some don't, but no matter what, Hops just keeps trying!".[4]

A profile for Hopsalot related to the JumpStart 3D Virtual World series states, "Hops loves to make new toys. He always has something fun to share. Hops is very good at games. Hops loves to play hide and seek. His best friend is CJ."

Hopsalot has often been shown to enjoying gardening. His favorite food seems to be carrots, but he grows a wide variety of vegetables. In World of JumpStart, Hopsalot is said to be good friends with ZuZu Petals, specifically due to their shared enjoyment of gardening.

Hopsalot has also been shown playing the violin in an idle animation in JumpStart Kindergarten (1997) and the video JumpStart Preschool: Who Left the Juice in the Caboose?.

Hopsalot is the kindergarten teacher in this game. He has his own garden in the school's backyard.

Hopsalot makes a cameo in the map with Frankie in The Great Stone Face on the map of United States.

Hopsalot is on a quest to find the lost Carrot Patch treasure. He visits several of his family members and his friend Bebop to help them.

Hopsalot is the kindergarten teacher. He has his own garden in the school's backyard.

Hopsalot appears at the Bandstand, where the player can view music videos.

Hopsalot is the bus driver. He also appears at the Bandstand, where the player can view music videos.

When Hopsalot discovers a magic bean, a beanstalk carries his schoolhouse up to Cloudtown. There, he meets Guthry the giant, who is sad because he feels that everyone has forgotten his birthday. Hopsalot finds out that the other citizens of Cloudtown are actually planning a surprise party for him, and they ask Hopsalot to help. Hopsalot explores Cloudtown to collect one hundred candles for Guthry's birthday cake.

Hopsalot is the player's travel buddy in the kindergarten version.

Hopsalot appears in the activity Hopsalot's Invention Tent. The player has to use shapes to recreate Hopsalot's inventions.

He also appears in the audience at Frankie's Paint-Along Songs tent before and after a movie that the player has helped to finish. There, he is shown to have a cousin named Jack who appears in "The Lucky Fisherman."

Hopsalot appears at the (Mexican) Spanish pavilion, and is associated with Serafina. He only translates certain Spanish words either when reading a story or in challenge mode when Serafina either tells the player where the flag is or asks for a certain piece of clothing, if the player clicks on him.

Hopsalot appears at the beginning of the game. He has built a time machine that will send Frankie to the time of the dinosaurs.

Hopsalot appears on each of the rainy day crafts.

Hopsalot is one of the JumpStart All-Stars, and the player can select him as a partner and call him for help.

Hopsalot is one of the main characters and host of the Hopsalot's Popsalot! activity. He is also one of the JumpStart All-Stars, and the player can select him as a partner and call him for help.

Hopsalot is also responsible for creating the devices that enable power-ups to be transformed into gadgets and track obstacles. His power-up is Hyper Carrot Fuel, his track trick is Bumpy Carrot Patch, and his scooter gadget is Carrot Hover Jets. His track is lined by carrots, and the surrounding areas have various tools and machinery.

Hopsalot is also one of the JumpStart All-Stars, and the player can select him as a partner and call him for help.

Hopsalot is an inventor who works for JumpStart Headquarters. He is in charge of creating machines to fix the problems caused by Dr. O. He wears a different outfit than his normal one in this era, one which consists of a white lab coat and goggles.

Hopsalot is also one of the JumpStart All-Stars, and the player can select him as a partner and call him for help.

Hopsalot appears in several music videos, He is still voiced by Brianne Siddall, who voiced him in the other Advanced series games.

Hopsalot is one of the main characters and local residents.

Hopsalot is one of the characters that the player can choose to be their racer. Here he's always called "Hops," and he looks most like his first grade form.

Hopsalot appears as a default resident of the player's Neighborhood, where the player can visit him and talk to him by clicking on him. He also appears in a tutorial cutscene for the activity Garden Defense.

Hopsalot also previously appeared in the StoryLand area in the game, prior to its movement to JumpStart Junior.

Hopsalot is a main cast character who helps guide the player through the game. He also appears in some storybooks.

Hopsalot is a main cast character who helps guide the player through the game. He also appears in some storybooks.

In JumpStart Preschool: Who Left the Juice in the Caboose?, Hopsalot is a preschool teacher.

In JumpStart Kindergarten: Why Did the Bus Stop?, Hopsalot is a bus driver.

In JumpStart PreK-1st Grade: Frankie's Field Trip, Hopsalot is a passenger aboard Frankie's bus. He mainly appears in the activity Fireman's Ladders, where the viewer must guide Hopsalot to the top of a fireman's pole by using a DVD remote to guide him.

Hopsalot appears in all of the Scholastic Kindergarten workbooks and Kindergarten Readers, as well as some other Readers.

Hopsalot appears in several of the Reading Readiness Readers released in 2005, usually as a secondary or minor character. He is the main character of the story Where Is Hopsalot?.

Retrieved from "https://jstart.fandom.com/wiki/Hopsalot?oldid=40175"
Community content is available under CC-BY-SA unless otherwise noted.