Ivy has light blue skin, blue lips, green eyes, and insect-like wings. She has purple hair which is tied in two pigtails. In the JumpStart 3D Virtual World series, she wears a dark indigo and pink striped dress. In newer appearances, she wears a pink, black, and gold dress.

Ivy is the kindest fairy in all the land, and she is a friend to all critters big and small.

In the JumpStart 3D Virtual World series, she is shown to be close to nature. In JumpStart Magic & Mythies, she demonstrates a strong love for farming and caring for crops and flowers, earning her the nickname the Blooming Fairy. Her profile for the game also describes her as sassy and easily distracted.

Ivy appears in the kindergarten, first grade, and second grade entries in this series. She resides in the meadows, and is one of the residents of JumpStart Town that the player can interact with and complete missions for her.

Ivy can be found at the Enchanted Sanctuary. She teaches new players how to raise Mythies. She will also give players quests to complete.

One of the Petz featured in the game is based off of Ivy.

In World of JumpStart, Ivy will sometimes have a computer generated voice, and other times she'll have her normal voice. This happened after the update to the Enchanted Sanctuary in 2018, before then, her voice never was computer generated.

Ivy appears as the flagwoman whenever the player starts the final lap or goes the wrong way. Some early promotional artwork of the game depicted Ivy in the character selection screen, but in the game's release, she is not a playable character.

Ivy can be found in the Mythie Meadows. Ivy's role is the same as in World of JumpStart.

Ivy appears in the online activity Ivy's Meadow, which appears on the Knowledge Adventure website. In this game, the player helps her collect fireflies by solving math problems. 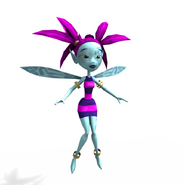 Ivy in World of JumpStart

Ivy as she appeared on a 2012 wallpaper

Ivy as she appears in Ivy's Meadow 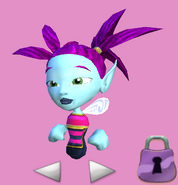 A Pet based off of Ivy
Add a photo to this gallery
Retrieved from "https://jstart.fandom.com/wiki/Ivy?oldid=37134"
Community content is available under CC-BY-SA unless otherwise noted.