Jo is a fifth grade girl with short orange hair. In JumpStart 5th Grade, her eyes are drawn as white ovals, and she wears a red headband, a gray T-shirt which she appears to be wearing over a white shirt, blue shorts, and red and white sneakers. She often rides a skateboard to get from place to place. Some promotional material for JumpStart 5th Grade states that she is 10 years old.[1]

In later appearances, she is drawn much more realistically in order to fit in with the other characters, and also has longer hair.

In JumpStart Adventure Challenge, she wears a white shirt with a pink collar, blue pants, and pink and white sneakers.

In the JumpStart Spy Masters series, Jo wears a white T-shirt with blue trim over a dark pink shirt. She also wears jeans and large red sneakers. She has green eyes.

Jo Hammet is a very tomboyish character. In JumpStart 5th Grade, she is an inquisitive, brave, and often sarcastic "kid detective". She enjoys skateboarding, and also rollerskating according to Adventure Challenge. Apparently, she is also fond of detective movies, as she plans to watch a marathon of them at the start of JumpStart 5th Grade. In the digital manual for JumpStart 5th Grade, it is mentioned that she loves art, and spends a lot of time at the Hooverville Museum of Art and Geography. Bernie is an old friend of hers. In the Spy Masters games, she tends to use a lot of stereotypical skateboarder lingo and slang, and is more aggressive than the other characters.

Jo is out to investigate the crimes of the villain Dr. X. At the end of the game, she receives national fame for putting a stop to Dr. X's scheme, but she doesn't let it go to her head.

Jo appears in the skateboarding and inline skating games.

Jo is a member of the Spy Masters.

Jo is a member of the Spy Masters.

Jo Hammet appears in the JumpStart Summer Vacation Activity Book for 5th Grade, in which she is the main character of the short story Jo Hammet, Kid Detective, Solves the Great Jewel Robbery.

Jo waking up from a nightmare (JumpStart 5th Grade) 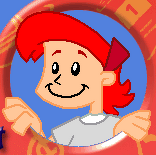 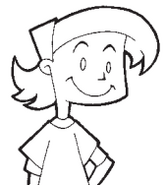 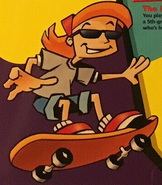 Jo in a 2D cutscene from the Spy Masters games

Retrieved from "https://jstart.fandom.com/wiki/Jo_Hammet?oldid=40449"
Community content is available under CC-BY-SA unless otherwise noted.