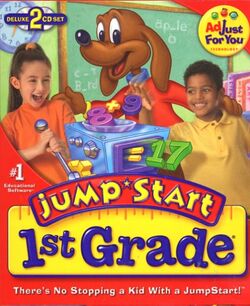 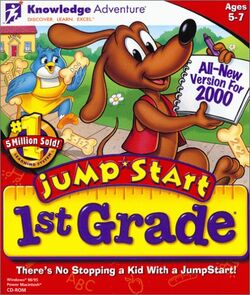 In the game, the player helps Frankie the dog find treasures by completing activities around the school.

In order to help Frankie with his treasure hunt, the player must gather clues. Clues are obtained by completing activities around the school. Each time the player completes an activity, they earn one clue. The toolbar displays how many clues the player currently has. When the player has three clues, they're ready for the treasure hunt.

In 2000, JumpStart 1st Grade was re-released as part of a Deluxe 2 CD Set. The game JumpStart Around the World was included with it.

Floyd talking to Frankie in the hallway

Sandbox activity
Add a photo to this gallery 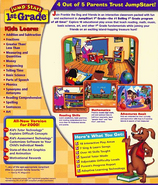 Retrieved from "https://jstart.fandom.com/wiki/JumpStart_1st_Grade_(1999)?oldid=40217"
Community content is available under CC-BY-SA unless otherwise noted.