Duendes del Sur
JumpStart 2nd Grade Math Workshop is a workbook published in 2000. It stars CJ and Edison is designed to teach math to 2nd Grade students. Its themes and story seem vaguely inspired by JumpStart Math for Second Graders, and it features the only appearances of the King, Princess, Jester, Cook, and Ratso other than that game, though much like CJ and Edison themselves, their designs are very different.

Though both are themed around medieval times, the two products' stoylines are quite different. CJ is not a royal flycatcher and he and Edison have only come to the medieval world by time travel. Also, Ratso does not seem to have any ambitions to take over the castle and never traps anyone in a magic mirror; rather, the workbook revolves around a royal tournament in which CJ and Ratso are both participants. 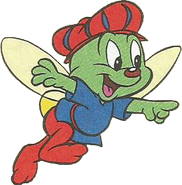 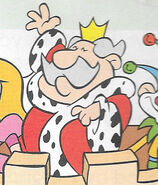 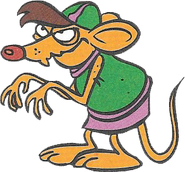 One of Ratso's henchmen

One of Ratso's henchmen
Add a photo to this gallery
Retrieved from "https://jstart.fandom.com/wiki/JumpStart_2nd_Grade_Math_Workshop?oldid=38421"
Community content is available under CC-BY-SA unless otherwise noted.