JumpStart Academy Preschool is a game initially released as a mobile app on January 22, 2019, and later released as a downloadable PC game as well. It is intended to teach a full preschool curriculum.

In the game, there are a variety of activities that can the player can complete to earn tickets, which can then be used to unlock new customization features for the player's avatar and house.

The player creates a custom avatar called a Jumpee that is used to explore and interact with the game's setting. The game mainly consists of several maps that are viewed from top-down. Each map has a series of checkpoints, and the player can complete an activity at each checkpoint. JumpStart characters also appear on the maps, and will talk to the player when reaching certain checkpoints.

Each checkpoint on the map teaches about a particular topic, such as a letter, number, or color. There are a few activities that can be completed at each checkpoint, after which the player can continue to the next checkpoint.

The ability to raise pets was added to the game on April 10, 2019, and an achievements feature was added on May 25, 2019. The player can collect trophies for completing achievements.

Frankie introducing the player to their room

Lucky Ducky
Add a photo to this gallery

Shopping for clothes
Add a photo to this gallery 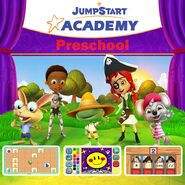 Add a photo to this gallery
Retrieved from "https://jstart.fandom.com/wiki/JumpStart_Academy_Preschool?oldid=36220"
Community content is available under CC-BY-SA unless otherwise noted.