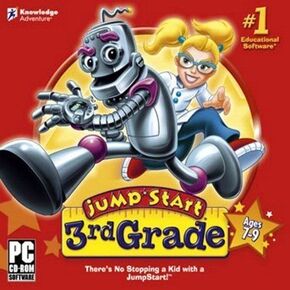 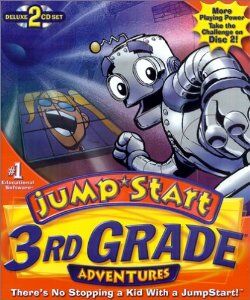 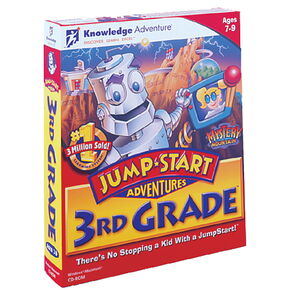 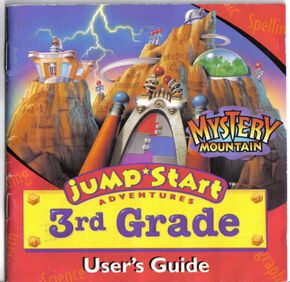 JumpStart Adventures 3rd Grade: Mystery Mountain is a JumpStart game that was made by Knowledge Adventure in 1996. As the title suggests, the game is intended to teach a third grade curriculum.

It was later re-released as JumpStart Advanced 3rd Grade: Fundamentals.

Set in a retro-futuristic universe, the game concerns Polly Spark, the bratty daughter of the world-famous inventor Professor Spark, and her attempt to alter history so that her inane answers to a history quiz she failed will be correct. To do this, she sends twenty-five reprogrammed robots back in time and, with her father conveniently away on a business trip, she takes over Mystery Mountain, the literal "mountain mansion" where she and her father live. The goal of the game is to help Botley, the robot assigned to keep Polly under control, save the world by retrieving each of the twenty-five robots and bringing them back to the present.

The players signs in at the third grade school, and then appears inside a classroom. The TransQuizzer is on a desk. After the player clicks on it, Botley crash-lands through the window, and tells the player about Polly's schemes. He takes the player to Mystery Mountain. At the front door, Polly contacts Botley and the player via a monitor, and says that she's recently changed the locks on the front door. After the player successfully unlocks the door and enters Mystery Mansion, Botley gives the player a utility belt for accessing various functions during the game.

Once all the robots are rescued, Polly reveals her ultimate plan to use Botley for the extra credit question, which more than makes up for the entire quiz. For the extra credit question, Polly said that the universe began with Botley and she therefore wants to send him all the way back in time to the Big Bang, which would cause him to be destroyed. At that moment, Professor Sparks arrives home from the Inventors' Convention. Professor Spark and Ms. Winkle, via a video monitor, agree to let Polly take the quiz again, though Ms. Winkle states that she can't give Polly a test with the same questions twice. Therefore, Ms. Winkle decides to give her a quiz on Latin, which doesn't please Polly, as she's no good at Latin.

The storyline ends at this point, but the user can continue playing the Mountain's activities for study purposes or for fun. The user can also enter the Time Machine Mission Control and view the "robot roost" without acquiring the Invention Points that would otherwise be required, but the Wheel of Invention cannot be played nor can the Time Machine be entered.

Each of the game's twenty-five missions (one for each robot that must be rescued) begins with the player selecting one of Polly's quiz questions from the TransQuizzer. Ms. Winkle asks a historical question and Polly gives a surrealistic and humorous answer, such as saying that the first chewing gum was made from super glue. Polly then appears on a monitor to state which robot she has sent back in time for the question and to list the four Mission Clues that need to be found for the mission. The player must travel between three different floors in the mansion to find the clues.

Botley, using his powerful sensory device, then determines which activities need to be played in order to retrieve the needed Mission Clues. Once all the Mission Clues have been collected, the user will still need to collect 1000 Invention Points in order to enter the Time Machine Mission Control.

Once inside the Time Machine Mission Control, the user has to get past the Wheel of Invention in order to acquire a Time Key and enter the Time Machine itself, though Polly has apparently reprogrammed the Wheel into a quiz show called "Pollywood Squares." Here, Monty Monitor quizzes the user with questions that provide the point in time where Polly has sent the missing robot and which eventually reveal the correct answer to Polly's original test question.

After this activity is completed, the user enters the Time Machine and travels back in time to retrieve the robot and bring it back to the present, where the rescued robots are deposited in an area called the "robot roost." After the robot has been rescued, the user begins a new mission by selecting another question from the TransQuizzer. The game continues in this manner until all twenty-five robots are returned to the present, at which point the game is completed.

The JumpStart 3rd Grade Summer Vacation Activity Book is inspired by this game, and uses artwork from it.

Botley meeting the player in the classroom

The Wheel of Invention

Inside the Time Machine

Retrieved from "https://jstart.fandom.com/wiki/JumpStart_Adventures_3rd_Grade:_Mystery_Mountain?oldid=38908"
Community content is available under CC-BY-SA unless otherwise noted.