JumpStart Baby is a game released by Knowledge Adventure in 2000. It focuses on learning concepts for ages 9-24 months. It replaced JumpStart Baby (1998).

In this game, the player engages in nine different activities around a house with a stuffed bear named Teddy. 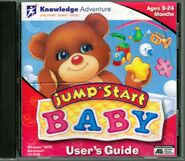 Retrieved from "https://jstart.fandom.com/wiki/JumpStart_Baby_(2000)?oldid=36681"
Community content is available under CC-BY-SA unless otherwise noted.