JumpStart Junior (also styled as JumpStart Jr.) is a JumpStart game available for download on PC and mobile devices. It is intended to teach various subjects to children ages 3-5.

This particular game takes place in StoryLand, and the player's main interactions are with Botley the robot. Botley has lost his spark plug, so his memory is faulty. It's up to the player to help him restore his memories.

One of the player's primary goals is to collect Spark Stories. Each story opens up a new land. 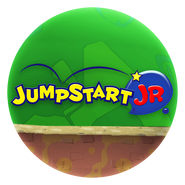 Icon used on the JumpStart website
Add a photo to this gallery
Retrieved from "https://jstart.fandom.com/wiki/JumpStart_Junior?oldid=33156"
Community content is available under CC-BY-SA unless otherwise noted.