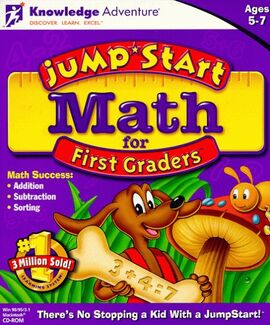 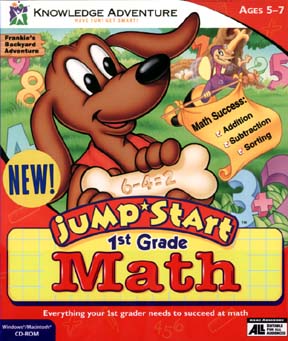 JumpStart Math for First Graders, originally released as JumpStart 1st Grade Math, is a game released in 1997 that focuses on teaching a first grade math curriculum.

Frankie loves to mess up his backyard, especially by digging holes for bones. But this disturbs the bugs who inhabit the yard, so as punishment, the Queen Bee shrinks Frankie down to their size. As penance, he can play activities that involve assisting the backyard bugs in various ways. This enables him to earn back some of his bones, which he can now use to make staircases leading him to the magical dog tags he needs to return to normal size.

The toolbar enables the user to access features such as Back/Exit, Help, Difficulty levels, the ability to access a tutoring feature called the Big Bug Book that gives information on the academic skills needed for every activity and level, Progress report, and a Bone counter.

In 1999, JumpStart Math for First Graders and its kindergarten and second grade counterparts were packaged and sold together as the JumpStart Math Mastery bundle.

The Queen Bee about to shrink Frankie

Frankie in front of his collar

Exit screen
Add a photo to this gallery 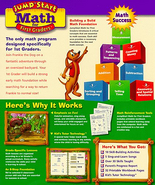 Back panel of the box 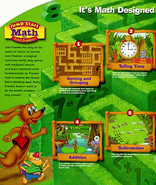 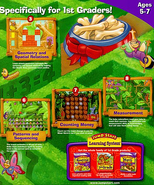 Retrieved from "https://jstart.fandom.com/wiki/JumpStart_Math_for_First_Graders?oldid=35197"
Community content is available under CC-BY-SA unless otherwise noted.