JumpStart Math for Kindergartners is a subject-based JumpStart game released by Knowledge Adventure in 1999 that focuses on kindergarten math skills.

In the game, the player follows Hopsalot to CloudTown, the land where birthdays come from, and helps set up a birthday party for a giant named Guthry.

The game begins at Hopsalot's schoolhouse. Hopsalot welcomes the player to kindergarten, when suddenly he receives a mysterious letter. The letter contains an invitation is for a birthday party in CloudTown. It also contains a bean. Hopsalot plants the bean, and it sprouts into a gigantic beanstalk that carries the schoolhouse into the sky. Then a giant comes out of his house and sees the house. He mistakes it for a birthday present, and Hopsalot says that it's no present, and that they've just come for a visit. The giant introduces himself as Guthry and says that it's his birthday. He's very gloomy because he feels that everyone has forgotten his birthday. He goes back into his house, and Hopsalot and the kids decide to help him feel better.

Hopsalot starts exploring CloudTown. He bumps into a girl named Dash. She tells him that CloudTown is where birthday parties come from, and that Guthry works hard making all the birthday stuff that they bring down to Earth. She says that the people of CloudTown are planning a special surprise party for Guthry. She asks Hopsalot and the kindergartners for help, and they agree to help. Dash wants them to find 100 sparkly candles for Guthry's birthday cake.

Thus, the player starts helping out around CloudTown to find candles for Guthry's cake. At the end of the game, Guthry recieves five presents, one from each area of CloudTown, and the giant birthday cake with 100 candles.

In 1999, JumpStart Math for Kindergartners and its first grade and second grade counterparts were packaged and sold together as the JumpStart Math Mastery bundle.

Outside the schoolhouse while in CloudTown

Rainbow Snowcones
Add a photo to this gallery 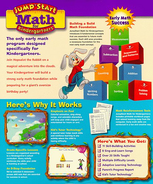 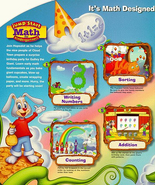 Left flap of the inside panel 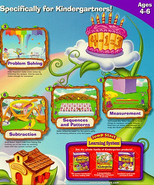 Right flap of the inside panel

Japanese box art (back)
Add a photo to this gallery 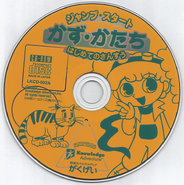 Japanese CD appearance
Add a photo to this gallery

Retrieved from "https://jstart.fandom.com/wiki/JumpStart_Math_for_Kindergartners?oldid=35390"
Community content is available under CC-BY-SA unless otherwise noted.