Not to be confused with the workbook of the same name. 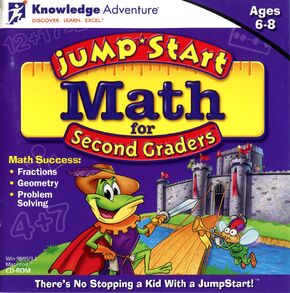 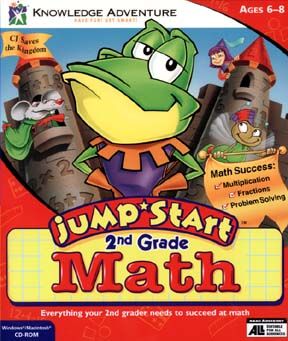 JumpStart Math for Second Graders, originally known as JumpStart 2nd Grade Math, is a game released in 1997 that focuses on a second grade math curriculum.

The villainous Ratso and his gang have taken over the castle and imprisoned the royal family. CJ, the royal flycatcher, sees his chance to become a knight. He and his best friend Edison go on a quest to rescue the Royal Prisoners and dethrone Ratso.

Ratso has trapped five Royal Prisoners inside of a mirror. In order to free them, CJ and Edison need to collect ingredients for magic potions. Each potion will set one of the prisoners free. The prisoners will specify which location in the castle CJ needs to visit to collect the next ingredient. Once CJ and Edison have all of the ingredients, they must return to the mirror to make the potion.

There are many activities in the castle. Each time CJ completes an activity, he earns one bravery point. He needs 100 bravery points to challenge Ratso.

Ratso has set up several challenges around the castle to hinder CJ. If CJ fails to complete a challenge, he'll be sent to the Dungeon.

After you've freed all of the prisoners and collect 100 bravery points, you're ready to challenge Ratso. You need to beat Ratso in a game of "Tic Tac Ratso". You have to decide whether the person occupying the square has the correct answer to the Princess's question. Select either 'true' or 'false'. If you get it right, you get the square. You and Ratso take turns guessing. The goal is occupy three squares in a row.

In 1999, JumpStart Math for Second Graders and its kindergarten and first grade counterparts were packaged and sold together as the JumpStart Math Mastery bundle.

It was also packaged with JumpStart Reading for Second Graders and JumpStart Explorers in the JumpStart 1st-3rd Grade Learning Playground bundle in 2002. When re-released in this way, the game was retitled to simply be called JumpStart Math.

The workbook JumpStart 2nd Grade Math Workshop appears to be somewhat inspired by this game.

A map of the castle

The gate to the castle

CJ and Edison in the opening

Inside the castle halls

The end screen
Add a photo to this gallery 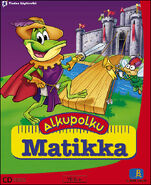 Finnish box art
Add a photo to this gallery

Retrieved from "https://jstart.fandom.com/wiki/JumpStart_Math_for_Second_Graders?oldid=39709"
Community content is available under CC-BY-SA unless otherwise noted.