The DVD centers on Frankie taking four passengers on a bus ride to different locations, such as a post office, farm, and fire station. During the trip, viewers encounter songs and activities. The DVD is inspired by and reuses content from JumpStart Kindergarten: Why Did the Bus Stop?.

The viewer must use the arrow keys and enter keys on a remote control for various interactions during the bus ride. These interactions include deciding which route to take, responding to situations that occur during the ride, and completing activities at the trip destinations. When the viewer encounters a song sequence, Frankie will periodically present the viewer with questions during the song, and the viewer must select one of three answers. After visiting a location, the viewer creates a scrapbook by selecting photos according to Frankie's hints.

Note: All song are reused from JumpStart Kindergarten: Why Did the Bus Stop?

A tutorial demonstration of how to use the remote

A closeup of Frankie driving the bus

A question and answer section

Fire station scrapbook
Add a photo to this gallery 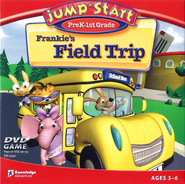 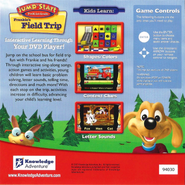 The back of the cover used in the JumpStart Ready to Learn System bundle
Add a photo to this gallery
Retrieved from "https://jstart.fandom.com/wiki/JumpStart_PreK-1st_Grade:_Frankie%27s_Field_Trip?oldid=39024"
Community content is available under CC-BY-SA unless otherwise noted.