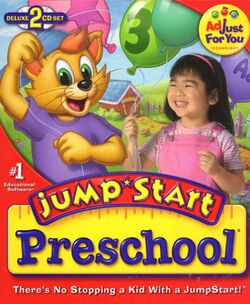 Boxart for the deluxe version 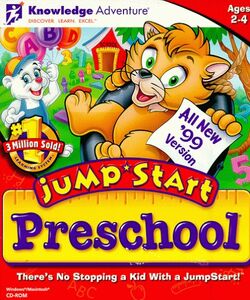 In the game, the player can explore and play in an interactive schoolhouse which contains many activities in the classroom. The player is rewarded with train tickets for completing activities. When the player collects four train tickets, they can go on a magical train ride to one of ten different locations. After visiting a location, the player gets a stamp in their passport book.

In this game, the Toolbar is represented by nine toy blocks. The Toolbar has the following features (from left to right):

In 2001, JumpStart Preschool was re-released as a Deluxe 2 CD Set, which included the game JumpStart Around the World as a bonus disc. The SmartTools Toolbar was also added as an extra feature with this release.

The Land of Many Seasons

The Land of Numbers

The Stars and Moon

The progress report
Add a photo to this gallery 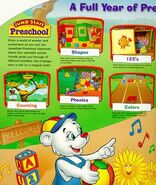 Inside left flap of the boxart, featuring Pierre 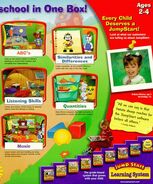 Inside right flap of the boxart 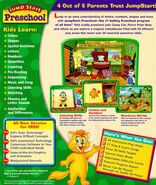 The back panel of the boxart

Retrieved from "https://jstart.fandom.com/wiki/JumpStart_Preschool_(1998)?oldid=40407"
Community content is available under CC-BY-SA unless otherwise noted.