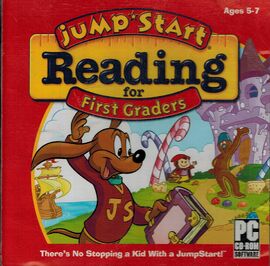 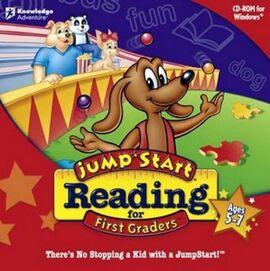 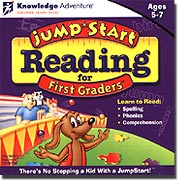 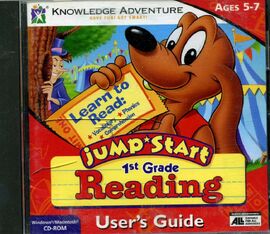 JumpStart Reading for First Graders is a JumpStart game released by Knowledge Adventure on August 12, 1997 that focuses on teaching language arts at the first grade level. It was previously titled JumpStart 1st Grade Reading until about 2000.

At the beginning of the game, Frankie introduces himself to the player and invites the player to his new home. Inside the living room, Frankie points out a framed photo of himself with his old friends from the circus. He says that he used to be a juggler, and begins demonstrating some juggling tricks, when suddenly one of Frankie's old circus friends, Katia, appears in his living room.

Katia tells Frankie that Mel, the magician she was formerly an assistant to, was performing mean tricks on the other circus performers. Eventually, his tricks caused the ringmaster to fire him. This made Mel very angry, and he turned all of the top performers into jigsaw puzzle pieces and scattered the pieces around the carnival. Frankie vows to help Katia and the other performers.

In 1999, JumpStart Reading for First Graders and its kindergarten and second grade counterparts were packaged and sold together as the JumpStart Learn to Read bundle. It was also included with JumpStart Numbers and JumpStart Music in the JumpStart 1st Grade Fun Pack bundle.

Frankie in the opening cutscene

All circus performers in the ending cutscene

The final screen
Add a photo to this gallery

French boxart
Add a photo to this gallery

Retrieved from "https://jstart.fandom.com/wiki/JumpStart_Reading_for_First_Graders?oldid=34455"
Community content is available under CC-BY-SA unless otherwise noted.