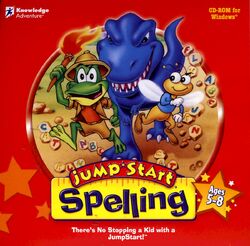 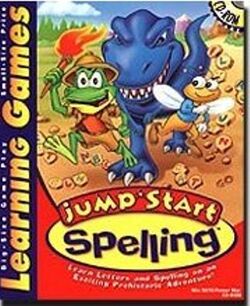 JumpStart Spelling is game released by Knowledge Adventure in 1998. It focuses on teaching spelling skills for ages 5-8. It is a part of the JumpStart Learning Games series.

In this game, CJ must venture through a prehistoric land to save Edison from some cavemen who have captured him to use him as a light source.

CJ and Edison travel to the "Land of the Lost Words", a prehistoric land where CJ hopes to find the fossil remains of his ancestors. While exploring, the two are sent flying by the mighty roar of a Tyrannosaurus rex. Edison lands near a family of cave people longing for fire for warmth and light. They see Edison and trap him inside of a cage to use his light for their purposes.

For a moment, CJ finds himself all alone, and worries that he'll never find Edison. Suddenly, a friendly-looking pterodactyl named Perry swoops down towards CJ, and CJ requests Perry's help in finding Edison, to which Perry happily agrees. The player must lead Perry and CJ through ten areas of the Land of the Lost Words to find Edison.

Rather than having a straightforward set of activities like most JumpStart games, JumpStart Spelling mainly utilizes a platforming style of gameplay, where two types of challenges can occur:

After a set of Spelling/Timing Obstacles is completed, then this challenge occurs:

The high scores screen
Add a photo to this gallery 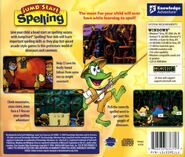 Back cover
Add a photo to this gallery 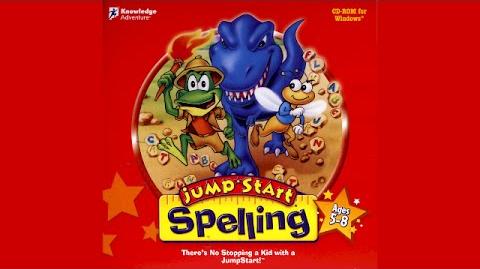 JumpStart Spelling (1998) - Game Intro
Add a photo to this gallery

Retrieved from "https://jstart.fandom.com/wiki/JumpStart_Spelling?oldid=33977"
Community content is available under CC-BY-SA unless otherwise noted.