JumpStart has released many books, including workbooks, activity books, and stories.

In the 90s, some of the JumpStart games included printable workbooks, in the form of digital file stored with the game's contents. Each of these workbooks contained activities related to its associated game's curriculum, and usually incorporated characters and story elements from the game as well.

In 1999, Entertainment Publications Inc. published a series of activity books featuring JumpStart characters for their Summer Vacation series. These books are intended to provide readers with a variety of activities during summer vacation, such as craft and journal ideas, short stories to read, and puzzles to solve. The content of these books isn't strictly educational.

Starting in 2000, Knowledge Adventure and Scholastic launched a series of JumpStart books for Pre-K, Kindergarten, 1st Grade, and 2nd Grade age levels. Most of these were workbooks; there were also several Readers, children's books geared to the reading levels of the various grades. The workbooks had commonalities with the games they were based on, such as featuring the same characters, story elements, difficulty levels, and a rewards system; in this case, stickers which were to be used in the event of completing worksheets or sections. All of these books were illustrated by Duendes del Sur. The character designs are generally the same as those featured in the JumpStart Advanced series, but there are small deviations, especially in the earlier books (e.g. some of the early books depicted Hopsalot with a red shirt and buck teeth). Some books also feature different outfits based on the theme and story line of the book.

In 2005, JumpStart released several printable stories based on the new series, then known as JumpStart World. These stories were made available to download from the JumpStart website. In 2007, physical copies of some of these short stories were included with the JumpStart Ready to Learn System bundle. This bundle referred to these stories as "Reading Readiness Readers". 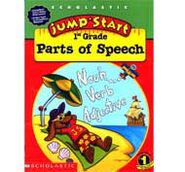 Add a photo to this gallery
Retrieved from "https://jstart.fandom.com/wiki/JumpStart_books?oldid=40419"
Community content is available under CC-BY-SA unless otherwise noted.