Artwork for the Academy series 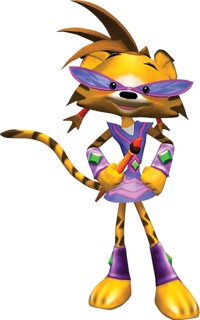 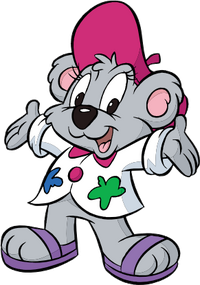 Artwork from the Advanced era

Kisha is a female character who first appeared in JumpStart Preschool (1995).

In the past, she was often a mascot character for JumpStart's Preschool media, alongside Eleanor, Casey and Pierre (see also: Preschool Gang).

Kisha was originally depicted as a koala with grayish brown fur and brown eyes. She wore a pink hat with a yellow flower. In JumpStart Pre-K, she had a similar appearance, except her fur was gray.

In JumpStart Preschool (1999), Kisha is depicted as a koala with brown fur and wears a shirt and cap which are both navy blue with yellow stars and circles.

In the JumpStart Advanced series, Kisha is depicted as a koala with light gray fur. She wears a pink beret, a white shirt with paint splotches on it, and purple sandals. At this point, she was the smallest member of the main cast of characters, according to herself in JumpStart Advanced 1st Grade: Fundamentals.

In the JumpStart World series, Kisha is depicted as a tiger.[1]She has orange yellow fur with dark brown stripes and a large brown tuft of fur on her head. She has three forms, one for preschool and kindergarten, one for first grade, and one for second grade. Her preschool/kindergarten form is small, with two round pigtails, light purple tinted glasses, a white and light purple dress with pale purple spots on the skirt part (though in some 2D art, they're either pink or not visible), and a pink band around her waist. Her first grade form is taller and skinnier with short straight pigtails, and pink arm warmers and leg warmers, and a thicker band around her belly, and her glasses have a purple rim. Her second grade form has slightly longer pigtails with red hairbands, and wears a purple and pink dress with a green gem on the stomach area, and purple arm warmers and leg warmers which each have a green gem as well and the rim of her glasses are almost pink.

In the JumpStart Academy series, Kisha is depicted as a koala. She has gray fur, brown irises, and a black nose. She wears a pink beret, a pink and white striped sleeveless dress with a pink pocket near the bottom, and pink shorts.

At least since the late nineties, Kisha has been depicted as creative and highly artistic, and especially fond of painting.

A biography for Kisha on the old Knowledge Adventure site pertaining to her appearance in JumpStart Preschool (1995) stated that her parents are from Australia, her favorite hobby is climbing, her favorite food is eucalyptus leaf sandwiches, and her favorite school subject is computer class. [2]

In JumpStart Preschool (1999), Kisha was depicted as being calm, sensible, and somewhat particular. She was often annoyed by Casey's antics, and preferred peace and quiet.

In the JumpStart World series, she is depicted as being athletic and strong-willed, while still maintaining an interest in art. The JumpStart Blog says, "Kisha may be all athlete from her tail to her paws, but everything she does she does with style. She trains hard and runs fast, but she’s always willing to slow down and admire your artwork!"[4]

Kisha's profile in JumpStart World says, "Kisha is the fastest runner in Camp. She loves to race. Kisha also loves to paint. Kisha says, 'Painting is always more fun with a friend!' Kisha and CJ are best friends."

In the JumpStart Academy series, Kisha is once again depicted as being very passionate about art, and seemingly lacks the athletic qualities her World series depiction had.

Kisha is one of the main characters.

Kisha is one of the main characters. She hosts the Bakery, Diner, and Toy Shop mini-games.

Kisha makes a cameo appearance in the woods.

Kisha is one of the main characters. She hosts the Toy Box, Player Piano, Easel, and Blocks mini-games. She has her own easel where she paints pictures, and she also has a collection of toy blocks.

Kisha is a camper at Camp Readalot. She hosts the Totem Pole mini-game.

Kisha is one of the player's travel buddies in the preschool version.

Kisha is the main character and mascot of this game. The player visits different locations at an art fair she hosts to collect pieces for her art-themed rides.

Kisha is associated with Hiroshi in the Japanese Pavilion. She translates what Hiroshi says if the player clicks on her, whether it comes to reading stories, where Hiroshi says the flag is during challenge mode, or asks for an article of clothing for the puppet.

Kisha appears once on each of the rainy day craft pages.

Kisha is a playable character alongside Frankie. The two are seeking to find and save Casey, who is lost in a wild animal park.

Kisha mainly appears in the Magic Chalk and Animal Mask mini-games. In Magic Chalk, Kisha will draw a picture on the chalkboard, and the the player must find the letter that begins the name of the object she drew. In Animal Mask, Kisha tells the player how to create a mask.

Kisha is one of the main characters and one of the JumpStart All-Stars. The player can select her as their partner and call her for help.

The player can visit Kisha at her house and play two activities there: Kisha's Music Studio and Kisha's Paint Studio.

Kisha is one of seven characters who can be selected to be the player's racing avatar and she has her own power-up, gadget, trick, and track. Her power-up is the Magic Paint Tube, her gadget is the Rainbow Bridge Painter, and her trick is the Paint Pits. Her track is lined by paint tubes, and the surrounding areas have various art supplies.

Kisha is an agent at JumpStart Headquarters, though she never formally appears in the main game.

Kisha has a cameo appearance in the intro song.

Kisha is one of the main characters and local residents.

Kisha is one of the characters that the player can choose to be their racer.

Kisha appears in one of the missions given to the player early on which involves meeting her and talking to her in DownTown. Afterwards, she doesn't appear there. She also appears as one of the default residents of the player's Neighborhood, where the player can visit her at her house and talk to her by clicking on her.

Kisha also previously appeared in the StoryLand area in the game, prior to its movement to JumpStart Junior.

Kisha appears as one of the possible avatars for the player to use in the game. She is unlocked when the player reaches level 8, and can be purchased for 800 coins.

Kisha is a main cast character who helps guide the player through the game.

Kisha is a main character in JumpStart Preschool: Who Left the Juice in the Caboose?.

Kisha also makes a cameo in JumpStart Kindergarten: Why Did the Bus Stop?, in which she can briefly be seen at the JumpStart Train Station, and She Likes Her Friend Boo Boo Bunny, to Shake Hands.

Kisha is a main character in the interactive DVD JumpStart PreK-1st Grade: Frankie's Field Trip. She is one of the passengers aboard the bus that Frankie drives. In the Corn Maze activity, the viewer must guide Kisha through a corn field by using a DVD remote.

Kisha appears in all the Pre-K workbooks and Pre-K Readers, as well as some other Readers.

Retrieved from "https://jstart.fandom.com/wiki/Kisha?oldid=32963"
Community content is available under CC-BY-SA unless otherwise noted.