KnowledgeLand is a game originally released by Knowledge Adventure in the fall of 1996.[1] It is not explicitly labeled as a JumpStart game, but it partially serves to promote JumpStart products. It is an example of an early massively-multiplayer online game, though it can also be played single-player.

The player can move their avatar around by clicking on the location or in the direction they would like to go to, or by using the arrow keys. The player's avatar can perform five animations: wave, jump, spin, fall down, and get up. The player can also chat with other players by using the Kidchat feature. The player can create dialogue boxes by selecting words or phrases from a list, which are then spoken aloud by a synthetic voice. Kidchat also includes a set of voice clips and sound effects.

One of the main objectives of the game is to collect Knowledge Cards, and then sort them into hands based on shared attributes. Knowledge Cards are described in the game's manual as the currency of KnowledgeLand, and they contain information relating to various school subjects. Each card depicts a person, place, animal, or thing.

There are two methods of obtaining Knowledge Cards: finding them around KnowledgeLand, and trading with other players. When a new player starts the game, a set of 20 Knowledge Cards are randomly scattered throughout KnowledgeLand. Each day afterwards that the player signs on, additional cards can be found in a concentrated area. These cards can be picked up by either clicking on them, or moving the avatar character over them. In multi-player mode, the player can trade cards with other players at the Trading Table. Here, players can offer up cards for a trade. The trade will only be made if both players agree to it.

The subject of the card determines which of the four main categories it belongs to: Science, Nature, History, or Fine Arts. Some cards also have a Continent or Century attribute, if the card's subject relates to a specific location or time period. A card can have many subcategories as well. For example, a card about an animal may also have attributes such as "mammals" and "herbivores". To learn more about a card, the player can use the magnifying glass to get a closeup view of the card, which shows an image of the subject and a description.

When the player collects Knowledge Cards, they will be stored in the player's Card Cruncher. When the player accesses their Card Cruncher, they can view all of the cards they currently possess. Unsorted cards will appear in the inventory shelf. The player can move cards from the inventory to the sorting shelves above to make hands. Each hand can contain a maximum of six cards. The value of a hand will be displayed as a certain number of points. The more categories that a set of cards have in common with each other, the more points that hand is worth.

The player can choose to cash in a hand of cards to transfer those points to their score. More avatar options become available when the player's score reaches certain amounts. Once cards are cashed in, they will appear in the player's card scrapbook. Cards in the scrapbook can't be used, but they can still be viewed with the magnifying glass.

The Launch Control screen, which allows the player to select a game mode

An in-game map of KnowledgeLand

The Scrapbook
Add a photo to this gallery

An aerial view of KnowledgeLand

A map of KnowledgeLand
Add a photo to this gallery 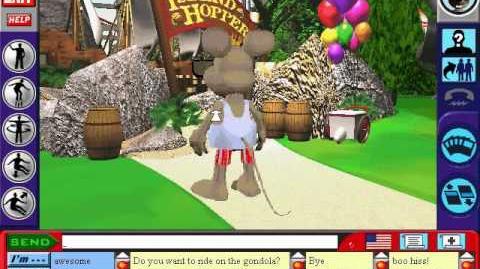 Retrieved from "https://jstart.fandom.com/wiki/KnowledgeLand?oldid=35496"
Community content is available under CC-BY-SA unless otherwise noted.