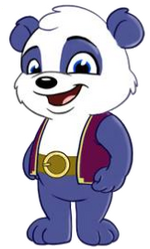 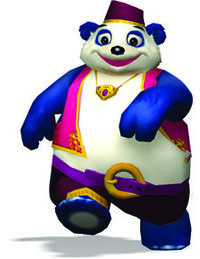 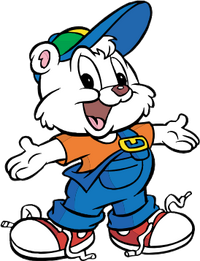 Pierre (also known as Pierre Polar Bear or Pierre the Bear in the past) is a male bear character who first appeared in JumpStart Preschool (1995). He was originally depicted as a polar bear, but he has been depicted as a panda bear since the release of JumpStart Phonics: Read & Rhyme in 2005. He is usually shown (at least since 1999) to be an avid musician.

In the past, he was often a mascot character for JumpStart's Preschool media, alongside Kisha, Eleanor and Casey (see also: Preschool Gang).

In the JumpStart Advanced series, he wore a blue cap with yellow and green stripes, blue overalls over an orange T-shirt, and red and white sneakers.

In JumpStart 3D Virtual World, Pierre is a panda bear.[1] He has dark blue arms, legs, ears, and rings around his eyes, while his face and belly are white. He has three forms, one for preschool/kindergarten, one for first grade, and one for second grade. In his preschool/kindergarten form, he is small and wears a pink vest and a large purple belt with a gold buckle. In his first grade form, he is essentially the same but a little bigger, and he also wears a pink cap and pink pants. In his second grade form, he is even bigger and wears a dark purple cap, dark purple pants, and a gold necklace.

Pierre's design for the JumpStart Academy series is very similar to his previous one, except that he is depicted with blue irises, his belt color is brown instead of purple, and he doesn't wear pants.

A biography for Pierre on the old Knowledge Adventure site pertaining to his appearance in JumpStart Preschool (1995) stated that his favorite hobby is bicycling, his favorite food is French fried ice cream, and his favorite school subject is spelling. [2]

In JumpStart Preschool (1999), Pierre is often hungry and likes to cook. He especially likes peanut butter. His affinity for peanut butter sandwiches has also appeared in other games. He also likes to tell jokes, which apparently Eleanor thinks are corny.

Starting in the JumpStart Advanced series, Pierre has been depicted as having a strong affinity for music, and particularly playing musical instruments. He tended to be seen playing the drum more than any other instrument, especially in the JumpStart All Stars learning tutor feature. His JumpStart All Stars learning type is 'The Musician'. The HTML manuals for JumpStart Advanced Preschool through 2nd Grade say, "Pierre teaches children using his musical learning style. He explains things through musical elements and songs." An online quiz for the JumpStart All-Stars also says, "Pierre's always got a song in his head. His notes, tempos, and melodies make musical learners sing!"

On a now-defunct site for the JumpStart All Stars, Pierre's profile said, "The whole world is a prop for Pierre's songs and games. He is extremely playful and has difficulty focusing on lessons or instructions unless they are presented in a fun and playful manner. When he's not indulging his passion for peanut butter sandwiches, he can be found with his drumsticks tapping out a rhythm on any available surface. When Pierre grows up, he wants to continuing playing--games and music!"[3]

Before he came to be depicted as a panda bear, Pierre was sometimes associated with snow and wintry environments, and seemed to enjoy playing in the snow.

Pierre's profile in JumpStart World says, "Pierre loves to play the flute, and listen to music. He can use music to solve puzzles. Pierre is a good friend to everyone. Pierre says, 'Friends and music make me a very happy Scout!' " According to Eleanor's JumpStart World profile, she and Pierre are good friends.

The Jumpstart Blog says, "Music is Pierre’s passion. He loves to dance and is never without his headphones or tambourine. With a new tune in his head every day, Pierre certainly moves to the beat of his own drum!"

In the JumpStart World series games, Pierre is depicted as being very good at finding things, largely due to him possessing a magical flute that plays music when it is near something he's looking for.

Pierre is one of the main characters. He mainly appears in the Pierre's Picture activity, where there are four Pierres, and the player must pick out which Pierre is different from the rest. He also appears to give instructions in the Doll House and Jigsaw Puzzle activities.

Pierre appears in the Carousel activity.

Pierre has a cameo appearance in the woods. He can't be interacted with.

Pierre is one of the main characters. In the "Mix and Match Book" activity, Pierre puts on different outfits, and the player has to find the pages in his book that match the outfit he's wearing. In the "Kitchen" activity, the player helps Pierre cook by giving him ingredients.

Pierre is one of the campers at Camp Readalot. He appears in the Vowel Bees activity.

Pierre is one of the player's travel buddies in the preschool version. He also appears in the Boat Afloat activity.

Unlike most of the other characters in this game, Pierre doesn't have his own activity, nor does he appear on the main screen. However, he appears in the audience when a movie plays in the "Frankie's Paint-Along Songs" activity. He also appears in some of the movie clips in that activity as well.

Pierre is associated with Chloe in the French Pavilion, and he translates the stories from French to English. He also translates certain French words in challenge mode when Chloe either tells the player where the flag is or asks for a certain piece of clothing, if the player clicks on him.

Pierre can be seen on the rainy day craft pages.

Pierre is one of the JumpStart All-Stars. The player can select him as a partner and call him for help.

Pierre is one of the JumpStart All-Stars. The player can select him as a partner and call him for help.

The player can visit Pierre at his house and play an activity, Pierre's Polar Test Track, there. For the scooter race, Pierre has his own specific power-up, gadget, trick, and track. His power-up is the Ice Crystal, his gadget is the Snowball Thrower, and his trick is the Ice Loop. His track is lined by ice blocks, and the surrounding areas have snow and pine trees.

Pierre is also one of the JumpStart All-Stars. The player can select him as a partner and call him for help.

Pierre is an agent at JumpStart Headquarters.

Pierre is also one of the JumpStart All-Stars. The player can select him as a partner and call him for help.

This is the last game where Pierre is a polar bear, and his last appearance in the Advanced Series. He makes a cameo in the intro song.

Pierre is one of the main characters and local residents.

Pierre is one of the characters that the player can choose to be their racer.

Pierre appears in AdventureLand, where the player can interact with him.

Pierre also previously appeared in the StoryLand area in the game, prior to its movement to JumpStart Junior.

Pierre appears as one of the possible avatars for the player to use in the game. He is unlocked when the player reaches level 12, and can be purchased for 1200 coins.

Pierre is a main cast character who helps guide the player through the game.

Pierre is a main character in JumpStart Preschool: Who Left the Juice in the Caboose?.

Pierre appears in all the Pre-K workbooks and Pre-K Readers, as well as some other Readers.

Retrieved from "https://jstart.fandom.com/wiki/Pierre?oldid=31516"
Community content is available under CC-BY-SA unless otherwise noted.