Pollio "Polly" Sparks (originally known as Polly Spark) is a female human character who debuted as the primary antagonist of JumpStart Adventures 3rd Grade: Mystery Mountain. She is Professor Spark's third-grade daughter, and Botley's main purpose is the unenviable task of keeping her under control.

In all of Polly's in-game appearances and Power Prep, she has blonde hair set in pigtails with orange hairbands. She wears large glasses, what appears to be a lab coat worn as a dress, bright green socks, and red and white sneakers. Most of the time, her eyebrows float above her head in a cartoonish fashion, though they tend to come down onto the tops of her glasses when she's in a particularly diabolical mood. According to some promotional material for JumpStart 3rd Grade, she is a third grader.

Polly's artwork for the Advanced series re-release of JumpStart 3rd Grade depicts her with a more realistic art style. She has blue irises, blonde eyebrows, and her glasses are clear with a light blue rim. She wears blue hairbands instead of orange, and she also wears blue jeans and a different kind of sneakers. It should be noted, however, that this redesign never appears in any game or piece of media other than the boxart itself.

Polly serves as the game's antagonist and is portrayed as being a spoiled brat, regularly calling Botley names such as "Snotley," "Potley" and "Dotley." She is shown to have an enormous ego, at one point proclaiming that she is the center of the universe (before altering history to make that statement reality). In the version 1.0 release of the game, Botley mentions that before he was created, Professor Spark always had trouble finding babysitters for Polly since she would scare them all away.

The game also makes her out to be rather fiendish considering that many of her changes to the timeline would almost certainly result in many people being hurt or killed, such as causing people to believe that radium isn't dangerous and therefore continue to use it in luminous paints, though it is unlikely she is entirely aware of the damage she can cause. Her actions would also give her a degree of personal power verging on world domination.

She also appears to have a small robotic lackey, who looks somewhat like a floating shark. This robot delivers Botley and the user new TransQuizzer disks, can occasionally be seen attempting to sabotage the Mountain's generator with a banana and appears with Polly in her father's secret chamber at the beginning and end of the game.

Polly is considerably nicer and agrees to help Botley rescue Coach Qwerty from the Trophy Room, though only when she is faced with the possibility of her father finding out that she had locked him in there to begin with. At the end of JumpStart Typing, she apologizes to Coach Qwerty for her actions, and he forgives her. One consistency, however, between her seemingly antithetical portrayals in 3rd Grade and Typing is that in both games her bad deeds arise out of wounded pride resulting from the fact that she apparently considers herself intellectually superior to others.

Interestingly, this is the first time she and Botley actually appear together, since, in JumpStart 3rd Grade, she remains in her father's secret chamber, apparently the Mountain's control room, for the entire game and communicates with Botley and the player only through a series of video monitors.

Polly is the main character and host of a quiz-show style game.

Polly appears in the JumpStart Summer Vacation Activity Book for 3rd Grade. In the "Where's Botley?" activity pages, the reader is presented with a scene, and asked to find where Polly, Botley and Egbert are. Polly and Botley are also the main characters of a short story included in the book called "Mystery Mountain Munchies".

Polly in the intro of Botley's explanation

Polly in the ending cutscene of JumpStart 3rd Grade 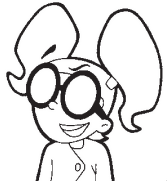 An illustration of Polly from the JumpStart 3rd Grade printable workbook 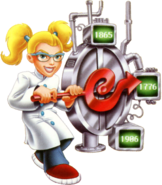 Polly in her chair in JumpStart Power Prep

Polly looking at a fish in JumpStart Power Prep

Polly looking at a globe in JumpStart Power Prep

Polly looking at a globe in JumpStart Power Prep

A concept drawing of Polly with Botley, Edison, CJ and Bebop

An illustration of Polly from the JumpStart 3rd Grade teacher's guide
Add a photo to this gallery
Retrieved from "https://jstart.fandom.com/wiki/Polly_Sparks?oldid=38289"
Community content is available under CC-BY-SA unless otherwise noted.