World of JumpStart
Punk-Punks are a type of creature that appear in several JumpStart games.

Punk-Punks are small bipedal creatures. The appearance of Punk-Punk can vary significantly depending on its type.

These Punk-Punks have fur and paws, and live only on land. They inhabit AdventureLand. Their fur can be a variety of colors, although brown seems to be the most common. Their mouths are typically not visible when closed.

This is a variation of Land-dwelling Punk-Punks, distinguished by their sleepy demeanor and sleeping caps. They differ from other Punk-Punks in a particular way - jumping on them produces a much higher bounce than a normal Punk-Punk.

These Punk-Punks have fish-like fins, scaly skin and live only underwater. They inhabit MarineLand. Their scales can be a variety of colors, although blueish-green seems to be the most common. Their mouths are typically not visible when closed.

These are a rare breed of Punk-Punk whose appearance varies greatly from the land-dwelling and water-dwelling Punk-Punks. They have gray skin, several points on top of their heads, and skinny arms and legs with claws. Their eyes, which resemble orbs, can come in a few colors, such as green, yellow, and purple.

Punk-Punks are generally described as pesky, mischevious troublemakers. They do not appear to speak, but make growling or grumbling sounds.

In JumpStart Magic & Mythies, Shadow Punks are described as nasty creatures that harm nature and damage the environment.

Land-dwelling and water-dwelling Punk-Punks once roamed freely throughout all of JumpStart, causing mischief and havoc wherever they went. In 1900, the panic caused by the Punk-Punks, which came to be known as "The Punk Punk Fiasco of 1900", lead to the formation of the organization S.P.L.A.T., which sought to deal with the troublesome Punk-Punks. The efforts of S.P.L.A.T. resulted in the Punk-Punks being contained in AdventureLand and MarineLand.

Shadow Punks are said to have attacked Terra about 100 years prior to the events of JumpStart Magic & Mythies.

Punk-Punks also appear in various activities, once again as obstacles for the player to avoid.

Water-dwelling Punk-Punks appear in this game as obstacles.

Land-dwelling and water-dwelling Punk-Punks appear in this game as obstacles.

Punk-Punks appear on the obstacles.

This is a puzzle game where players have to quickly match up Punk-Punks. In this game, Punk-Punks come in several colors, each with a different facial expression as well: orange (angry), yellow (scared), green (sick), light blue (confused), dark blue (gloomy), brown (sleepy), and pink (feminine). When Punk-Punks are matched, they can form bonuses, such as bombs, swirls, and clocks. The bombs have the same color and face of the type of Punk-Punk they were formed from.

In this game, Shadow Punks invade Terra, and elves and Jumpeez band together to thwart them.

Sketches of Punk-Punks with various expressions 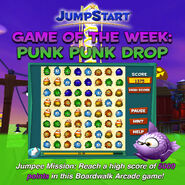 A promotional image for the minigame Punk-Punk Drop

Retrieved from "https://jstart.fandom.com/wiki/Punk-Punks?oldid=38899"
Community content is available under CC-BY-SA unless otherwise noted.