Rex is a male fox character introduced in the JumpStart Academy series.

Rex has mostly orange fur with white areas on his face and stomach, black paws and ears, a brown nose, and bright green irises. He has a tuft of shaggy fur atop his head. His standard attire consists of a green T-shirt.

Rex appears as a possible avatar for the player. He is unlocked at level 14, and can be purchased for 1400 coins.

Rex appears in some of the storybooks. 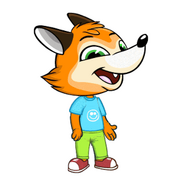 Rex as an avatar in JumpStart Academy Math

Rex in a story from JumpStart Academy Kindergarten
Add a photo to this gallery
Retrieved from "https://jstart.fandom.com/wiki/Rex?oldid=34091"
Community content is available under CC-BY-SA unless otherwise noted.