Grey DeLisle
Roxy is a female raccoon character who debuted in JumpStart Languages.

In JumpStart Languages, Roxy has light brown fur with darker brown stripes, the same darker brown around her eyes, hands, and feet, and a black nose. She wears a white T-shirt with red sleeves, a blue skirt, and a sash across her torso (from her right shoulder to above her left hip) which has red and white stripes and a blue portion with a single white star. Her design incorporates the color scheme and design elements of the American flag.

In the JumpStart Academy series, Roxy has light gray fur with darker gray stripes on her tail, and darker gray fur around her eyes and on her ears. However, her hands and feet are not likewise colored. She also has a pink nose and purple irises. She wears a red strapless dress.

Roxy is the hostess of the (American) English Pavilion. As her associate, Frankie, reveals, she is from the United States, but it is never mentioned which state she is from, or if she is from the capital.

When she dances, it is similar to the hula, as while she moves her feet and tail, she has her hands in fists facing each other, and she moves her mouth, but it never matches the words to either song on the radio.

Roxy appears as a possible avatar for the player. She and Casey are the only two avatar characters to be unlocked by default.

Roxy appears in a storybook about the letter R. 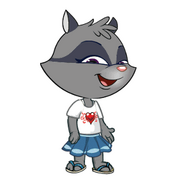 Roxy as an avatar in JumpStart Academy Math

Roxy in a storybook from JumpStart Academy Preschool
Add a photo to this gallery
Retrieved from "https://jstart.fandom.com/wiki/Roxy?oldid=37128"
Community content is available under CC-BY-SA unless otherwise noted.