Sarge has mostly brown feathers, with dark brown feathers on the tips of his wings, and light cream feathers below his beak and above his eyes. He has a yellow beak and light orange feet. He wears a white cap and apron, and a green shirt with rolled up sleeves.

Sarge acts like a drill sergeant, although his actual job is managing a lunchroom. He refers to Frankie as "private Frankie", and demands that he salute properly when greeting him. He is quite stern, although not mean.

Sarge appears in two activities in the lunchroom. In Snack Machine, the player must purchase food and drink items using money that Sarge provides. In Alphabet Soup, the player must spell out words for Sarge using the letters in the soup. In the Music Room activity, he sings one of the songs that the player can listen to, Sarge's Alphabet Song.

Sarge in the Snack Machine activity

Sarge in the Alphabet Soup activity 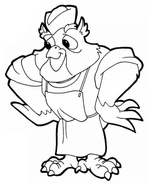 An illustration of Sarge from the JumpStart 1st Grade teacher's guide 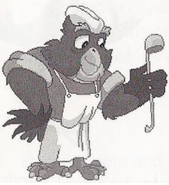 An illustration of Sarge from the User's Manual
Add a photo to this gallery
Retrieved from "https://jstart.fandom.com/wiki/Sarge?oldid=31398"
Community content is available under CC-BY-SA unless otherwise noted.