Windy Hollows is a magic and witchcraft-themed location in World of JumpStart. It is intended for all ages. It was initially released as a FunZone in MainStreet[1], but was announced as its own area in the game on November 18, 2010.[2] It is also featured in the graphic novel JumpStart Windy Hollows.

Windy Hollows allows players to access many fantasy-themed activities and areas. Various ingredients for Charm potions are scattered throughout Windy Hollows, which players can freely collect. While in Windy Hollows, the number of each type of ingredient that the player has collected will be displayed at the top of the screen.

Promotional screenshot of the Charms Building

Selecting a broom from the Broom Closet

Using a broom to fly over the Magic Marsh 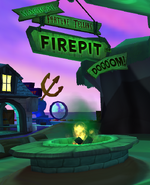 Retrieved from "https://jstart.fandom.com/wiki/Windy_Hollows?oldid=30809"
Community content is available under CC-BY-SA unless otherwise noted.