Male
Yogi is a male yeti character who debuted in the JumpStart Academy series.

Yogi has white fur, and light blue skin that is visible on his face, stomach, palms, and feet. He has golden irises, thick black eyebrows, and slightly yellowish teeth. His torso and arms are rather bulky.

Yogi is the host of the fractions unit, and appears during all fractions problems. He also appears as a possible avatar for the player. He is unlocked when the player reaches level 18, and can be purchased for 1800 coins.

Yogi appears in a storybook about the letter Y. 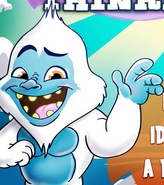 Yogi with a yo-yo 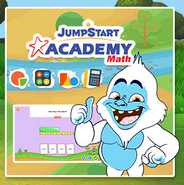 Yogi on a promotional image for JumpStart Academy Math 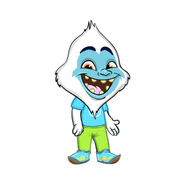 Yogi as an avatar in JumpStart Academy Math

Yogi in a storybook from JumpStart Academy Preschool
Add a photo to this gallery
Retrieved from "https://jstart.fandom.com/wiki/Yogi?oldid=34154"
Community content is available under CC-BY-SA unless otherwise noted.